Viviane Sassen | In and Out of Fashion

Challenging the norms of contemporary fashion photography, Viviane Sassen exhibits her first retrospective of her 17 year career. Rejecting the commercial norms of fashion imagery Sassen work is surreal, energetic and sometimes humorous, created with the intention of challenging our prescriptive ideas of beauty. The exhibition uses projectors, photography and mirrors with her work divided into series, the most controversial and iconic being Nudes. A Journey. Of particular interest to the fans of Sassen will be her famed campaign for Mui Mui fashion house, which incorporated her surrealist style and experimental collage to produce a disconcerting beautiful tangle of models limbs. A respected and award winning artist, this exhibition effectively captures the spontaneity and unconventionality that has become the idiom of Sassens work.

This year the annual Métiers d’Art collection was hosted in the medieval Palace in West Lothian where Mary Queen of Scots was born. In 1924 Coco Chanel began a relationship with Hugh Grosvenor, 2nd Duke of Westminster whom she frequently travelled to Scotland with. Each year the Métiers d’Art event is held in a different country to showcases specialist craftsmanship. Chanel rescued Barrie Knitwear factory in Hawick in August and the jobs of its 176 workers. The factory has produced cashmere knitwear for Chanel for over twenty-five years, including their famous two-tone cardigans. The rescue is part of Chanel’s mission to safeguard the future of artisan workshops practicing endangered skills.

Diana Vreeland: The Eye Has To Travel 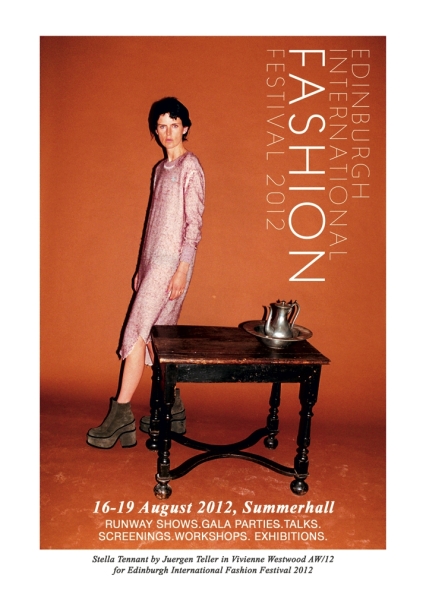 Menswear-inspired looks have certainly established themselves as street style staples, with boyfriend jeans, wide button-down shirts and tailored blazers. But leave it to Jean Paul Gaultier to take it to a level of sheer extravagance. His Fall 2012 Couture show, presented in Paris on July 4, included more than just ‘borrowed from the boys’ ensembles: it was downright dandyism.

Coattails, cravats, and canes, along with top hats, tailored suits and rich fabrics, recall a bygone era of dancehalls and indulgence. Models dressed as sultry Fred Astaires strut down the runway with cigarettes and pouty red lips. The key is to be boyish yet feminine, a fusion easily achieved through the combination of straight trousers and Gaultier’s signature bustier tops. Add in a suggestive pair of stockings and the intentions become clear.

Another trend, a favourite amongst the stylish going-out crowds, was prominent in the Gaultier show: that of the 1920s flapper. Think loose, fringed dresses, long strands of pearls, and flowered headbands. The jewel-toned frocks, embellished boleros, and rich furs embodied the very luxury of early screen sirens, whereas sheer fabrics and architectural tops nod to the house’s modernity and experimentation. A couture budget coupled with Gaultier’s genius results in nothing less than a spectacular display of fun fashion.

Where Jean Paul Gaultier’s girl is provocative and avant-garde, Christian Dior’s is a lady, subdued yet effortlessly classy. Raf Simons made his Dior debut this season, replacing John Galliano as the house’s head designer. Having only limited time to study Dior’s archives, Simons impressed with the fusion of his signature minimalism and Dior’s chic and intricate style. Elegant dresses, with full skirts accentuating a lady’s figure, peplum shirts, and sleek embellished gowns showcased the designer’s skills while embracing the house’s history. From a distance the clothes appear classic and simple, but they yield excellent craftsmanship and luxury upon closer inspection, just as any couture show warrants. The opening looks could easily trickle down into everyday-wear, what with the black tuxedo jackets and cigarette trousers recalling the menswear trend from before. All in all, Simons’ debut collection was hailed as “triumphant”, lacking only in the absence of Galliano’s theatricality. But Simons has only just begun, and the beginning was promising. 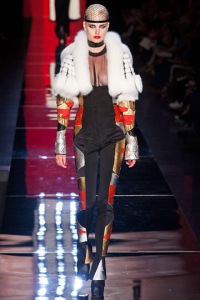