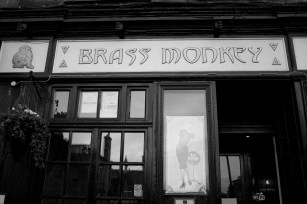 Every day at 3pm the Brass Monkey projects a film in their back room. They have a good list of  films to choose from but you can also bring your own DVD along. The first person to arrive  for 3pm gets to select which film gets shown. The room is also available to hire in the evenings on week nights for events.

This independent arts cinema originally opened in 1914 as the King’s Cinema. It was refurbished in 1949 when it was renamed The Cameo. In the mid-1980s two extra stadium-seating screens were added and the original main auditorium was restored to its full Edwardian splendour. The three auditoria accommodate 253, 75 & 66 people. The Cameo is fully licensed, so you can enjoy a drink while you’re watching a film. 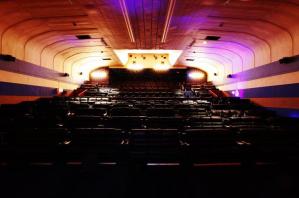 The Dominion Cinema is Scotland’s premier family owned and run independent cinema.
Opened as an Art Deco single screen cinema by Capt W. M. Cameron in 1938, the Dominion has seen many changes through the years, including conversion to four screens, plus a private screening lounge.

In 1979 the Filmhouse was converted from an old boarded-up Church. A 100 seat auditorium (now cinema 2) accessed via Morrison Street Lane was the fairly inauspicious start. The listed front of the building was to remain inaccessible for some years to come.
By 1985 things had been transformed. A new 280 seat auditorium and bar were added and the front entrance opened up. That was how things remained until 1997 when the functions hall was transformed into a third screen.

The present Filmhouse has 3 cinemas which are open to the public seven days a week. Cinema One screens the latest international releases and presents special events with guests talking about their work in different branches of the film industry. Cinemas Two and Three include a wider range of material from the history of world cinema, 16mm, video and digital video work.
The result is that Filmhouse presents a more varied programme than any other cinema in the country.